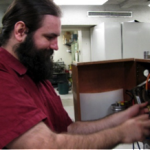 Whether it’s piles of empty oxygen tanks on Mount Everest, or dead satellites in orbit, exploration leaves messy footprints behind. While this detritus is bad enough on Mount Everest, in space the effects could be disastrous. While space is mind-bogglingly big, the space around our planet is limited, and filling fast. In order for an object to stay in orbit, it needs to move at about 8 kilometres a second, which is literally ‘faster than a speeding bullet.’ At these speeds, if two objects collide, be they operational satellites, spent rocket stages or something else, the collision will create a cloud of smaller debris which can create yet more debris through future collisions; dubbed the Kessler Syndrome, after NASA scientist Donald Kessler1. If we don’t take action to reduce the Kessler Syndrome, the chances of a satellite colliding with a disabling piece of debris will be so high that new launches may not be feasible.

Most proposed plans for active debris removal (ADR) campaigns centre around the disposal of large items of debris such as spent rocket stages and defunct satellites. By removing these larger items, we can prevent their collision and fragmentation into many smaller, un-trackable pieces of debris, which can be just as hazardous2. The question then becomes one of logistics, with the key problems being first, how to capture debris massing several tons, and second, what to do with the detritus when captured. Many ADR campaigns share the same basic structure: match orbit with the debris, capture it, and then de-orbit the debris with a chemical rocket to allow for control over impact location. There are a few inherent difficulties in this process – a debris-hunter can’t use chemical rockets, as they’re too inefficient for long-term use in this way, and any plan that involves crashing detritus into the Earth comes with the risk of crashing somewhere problematic.

This is where we come in. At Neumann Space we are developing a solid-fuelled electric propulsion system that can use common metals as its “fuel,” can be powered by solar panel arrays and is very fuel efficient. In fact, we believe our system is the sort of low-thrust, high-efficiency engine that would allow a properly designed spacecraft to fulfil the same sort of role as a tugboat, as it enables the marshalling and collection of uncontrolled debris or end-of-life satellites.

Our drive works on similar principles to an arc welder, and, like a welder, can work on nearly anything conductive. This flexibility of fuel is unique to our product, and vital to changing the economics of orbital debris, as a Neumann Drive is proven to work well with the common ‘aerospace metals’ – titanium, magnesium, and aluminium. For example, a spent rocket stage might mass 5 tons, and if 4 tons of that is present as aluminium fuel tank and structural ribbing, then that is 4 tons of salvageable fuel for a debris-hunter.

We believe that our system can not only be used to move debris to orbits with faster decay times, but that our system can change the perceived value of space junk. We envisage a semi-autonomous debris-hunter that can match orbits with debris, capture it and then bring it back to a refinery for reprocessing and recycling. If we can process defunct satellites and spent rocket stages into raw materials for the next stage of space exploration, we can help to make the economic ecosystem of space more circular and less linear. That is to say, rather than single-use, hand-crafted artisanal spacecraft, we can move towards more standardisation and mass-production in the space vehicle supply chain, as well as encouraging the recycling of materials in space. After all, someone has already spent around $10,000USD per kilogram to launch that material into orbit, so it is only sensible that it gets used more than once. 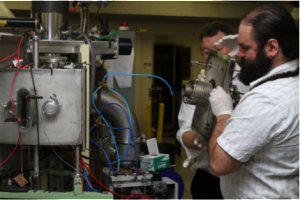 Recycling space debris would allow us to refuel vehicles using our technology with reprocessed space junk. Since our system utilises solid conductive fuel rods, refuelling our system would be much easier than refuelling a liquid or gas fuelled system, such as envisaged by Dr Bryan Benedict of Intelsat, among others3. A Hall Effect thruster system typically uses xenon as its “fuel,” and this xenon must be brought from Earth while stored as a pressurised gas. Thus, transferring the xenon fuel across would be challenging, as the systems would need to line up the feed hose with the inlet valve carefully, ensure a good seal for the fuel transfer, and then ensure that everything is properly sealed up after the transfer to prevent leaks. If the satellite uses a liquid hypergolic fuel, such as hydrazine, then things are even more complicated; liquids slosh about, they must be pumped, and in microgravity there will be cavitation, meaning “bubbles” of vacuum will form inside the liquid fuel.

Meanwhile, this all assumes that the satellite is designed to be refuelled; the problem is that none currently are. This means that the process is even harder; a system would need to drill into the satellite, hoping that it is aimed at the fuel tank rather than something more sensitive, and be able to deal with the thrust of any dregs escaping from the fuel tank.

Since hypergolic fuels have a tendency to decompose when heated, a hot drill bit entering the fuel tank is not likely to be a good thing. For these legacy devices, we’d propose a semi-autonomous tug that is designed to be refuellable from the beginning. When the tug is getting low on fuel, it can visit a fuel depot and have fresh fuel rods installed quickly, easily and safely; simply screw in new rods of metallic fuel, test the connections, and the tug is ready to continue. After being refuelled the tug can then undock and return to its allotted tasks. Similarly, these tugs could remove end of life, defunct, uncommunicative or otherwise undesirable satellites from valuable parts of space or from certain designated “graveyard orbits” for reprocessing. This would allow the tugs to open up satellite slots in geosynchronous orbit, lower hazards for satellites in these environments and recycle materials that are already in space.

Refinery-sourced recycled debris would allow a tugboat or junk-hunter to operate for as long as its solar panels and electronics can remain working, thus the total mission cost of lifespan extension and ADR campaigns can be lowered and amortised over longer periods. Excess fuel rods can also be sold to third parties that require refuelling, be they existing vehicles or vehicles launched from the surface with minimal on-board fuel that can rendezvous with the fuel depot. In the longer term, this will create markets in space for space derived materials, as well as enable the testing of refining and fabrication techniques in space.

These are a couple of the many exciting applications for our system, and we look forward to developing it further with assistance from others in the aerospace industry. Hopefully, someday soon, the first garbage truck will drive around Earth’s orbit, collecting the junk that has been left to accumulate for far too long already.

Having grown up reading a lot of science fiction, Patrick decided to study science fact by undertaking his undergraduate studies in aerospace engineering and physics at the University of Sydney. After completing his undergraduate thesis on electric propulsion, Patrick followed the same project through his master’s and doctoral studies, which includes the work he describes in his article. As a keenly practical individual, Patrick has formed a company, Neumann Space Pty Ltd, to develop and commercialise his invention for the greater benefit of humanity.

The Growing Problem of Space Junk