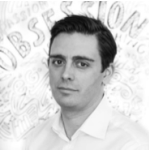 Companies in all sectors of the economy are facing the same dilemma: how to respond to the enormous challenges confronting them in a time of digital disruption, rapid evolution of businesses and the demands of clients. Organisations have to somehow transform their businesses whilst at the same time keeping their shareholders happy with ‘business as usual’ and delivering expected returns on investment. Similarly, for governments, they must somehow transform their modes of service delivery whilst meeting the expectations of politicians and the community at large.

The solution to these challenges does not lie in ever bigger expenditure on technology. “We have the technology” -the solution lies in understanding and recognizing the characteristics and strengths required in your workforce. Of those you already have and those you need to attract and ultimately retain.

To set the scene: five years ago, I was watching a documentary about a young aboriginal woman, Gina, in one of the less well known aboriginal communities in Australia. Her community was at risk of a forced displacement by the government and a global mining company. Gina decided that enough was enough and came up with a way to change things. She set about providing for her community through building a haulage business and contracting services back to the mining company at a profit.

On the face of it everything was against her: there were no open doors, but she saw a better way and she was going to see it through. As a result of her efforts, Gina’s community became more affluent, crime rates dropped, schooling and other basic services improved and all because one woman had the drive and determination to get there against all the odds.

Why did Gina do this? Why didn’t anyone else? What qualities did Gina have over and above the leaders of the community?

This got me thinking differently about how we approach sustainable step-change in our organisations, particularly when faced with adversity, disruption and the need to adapt.

What much of industry is facing in digital transformation can be viewed as a process of natural selection – “adapt or die”. We cannot rely solely on the notion of continuous improvement and incremental change. At some point, we have to take a large step forward to succeed.

Whilst the mobile industry has always been, and will continue to be, at the forefront of innovation at a technology level, the approach to its greatest asset, its people, is still dominated by theories and processes that haven’t much changed in nearly 40 years. Instead of seeing our co-workers in terms of their titles, their backgrounds and career paths, we need to learn how to “genuinely” view and value people for what they actually bring to the table.

With some notable exceptions, game-changing behaviours and traditional corporate culture have been relatively incompatible. The classic entrepreneurial story is of an employee growing frustrated with not being able to get management to see the value in their new product suggestion or ideas. The consequence? They become disillusioned and leave to do their own thing or even worse, join a competitor.

Time to unleash the Game Changers

Last year we published THE DNA OF A GAME CHANGER STUDY 2015. This focused on the premise that organisations are neglecting a special group of talent, just like Gina, which has the potential to ‘change landscapes’ in their world and for those around them. The Game Changers. 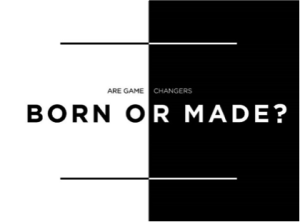 Our 2015 study demonstrated that Game Changers are fundamentally different from ‘High Potentials’ and ‘Traditional Leaders’ and are difficult to define with traditional talent assessment frameworks. It identified the characteristics of the Game Changer – as having an uncommon combination of obsession and imagination, which often leaves them being referred to as eccentric and ‘difficult’. 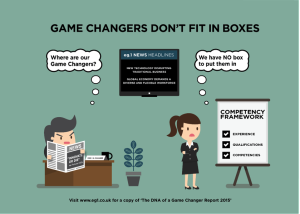 Leaders need game-changing individuals at every level across their organisation, who can see ‘ahead of the curve’, are willing to take risks, and have the drive to make change. They are the individuals who ensure businesses do more than just survive in today’s fast paced digital world. Game Changers often have the unique ability to ‘see around corners’ in ways that most of us cannot. They do not fit in to our traditional people metrics, talent frameworks or nine box grids. However, they are very often hiding right under our noses and at ALL levels in the organisation.

Now is the time to change recruitment, talent management processes and organisational culture in order to avoid future high potential people being clones of what has gone before. We need now to break the cycle of creating risk averse and innovation-stifling cultures with vision and action.

The traditional approach to talent recruitment and development has created a very one dimensional, individualistic, hierarchical view of leadership, that creates forced and at times highly discriminative processes and, with it, inflexible and stifling organisational cultures. Our cultures need to move away from being “fail safe” and ones where people feel “safe to fail”. In the modern world of business, it can be hugely frustrating, even futile, being an imaginative and innovative thinker unless you have a team around you to help achieve the possibilities that you see in your world. Long-term transformational change, and the success that comes with it, depends on game-changing teams and environments.

Game Changers as we know them today

There are many examples of how industries and business models can be changed by hidden talent, if we recognise it and let it flourish.

In 2001, Google engineer Paul Buchheit started using his ‘20% time’ (the one day a week Google allows staff to work on new projects) to develop a new product. Initially codenamed Caribou, the product was, after nearly three years of development, released as Gmail and would reinvent the entire web-based email category, capturing 53% of the market.

When Ken Kutaragi, a junior Sony employee, presented a modified version of the Nintendo and suggested Sony consider developing a more powerful game console of its own, many senior managers were enraged and tried to kill the project. Thankfully calmer heads prevailed. The result was the PlayStation.

But equally there are many examples of Game Changers who are unable to realise their potential within an organisation, and have to start out on their own to do so. Take Natalie Massenet, founder of Net-a-Porter, a website in magazine format for selling designer fashion. Credited by many as changing the way designer fashion is retailed, she began her career as a fashion journalist at Women’s Wear Daily and then moved on to Tatler in the UK, where she worked as assistant for the fashion director. What drove Natalie to leave Tatler in 1998 and start working as a freelancer before setting up Net-a-Porter in 2000?

One can surmise that it was because she saw the potential of online fashion retailing well before her colleagues did.

Apple got it right with their 1997 Think Different commercial…

“Here’s to the crazy ones. The misfits. The rebels. The troublemakers. The round pegs in the square holes. The ones who see things differently. They’re not fond of rules. And they have no respect for the status quo. You can quote them, disagree with them, glorify or vilify them. About the only thing you can’t do is ignore them. Because they change things. They push the human race forward. And while some may see them as the crazy ones, we see genius. Because the people who are crazy enough to think they can change the world, are the ones who do.”

Almost 20 years later, we are still struggling to make the fundamental change in our businesses to embrace the game-changing talent at all levels that has the potential to get us there. 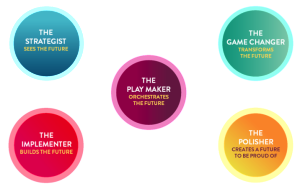 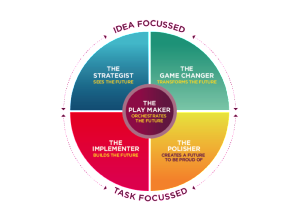 The Future: How do we recognise this special talent and make the best use of it?

Our latest study, The DNA of a Game-Changing Team 2016, delves into the mind of a Game Changer in order to really understand what makes them ‘tick’. It looks at how organisations can get the best from Game Changers and how to realise their potential within the context of teams and organisational culture. We know that the key to success is to transform individual action into collective power.

Remember: not everyone is a Game Changer, but everyone can make a game-changing contribution!

Nathan Ott, CEO at eg.1 and Director at The GC Index.

Nathan is a founding member of eg.1. Inspired by years in the industry seeking that “je ne sais quoi”, Nathan is the author of THE DNA OF A GAME CHANGER and co-developer of eg.1’s THE GC INDEX – the only assessment instrument to identify, assess and develop corporate Game Changers. Prior to eg.1 Nathan began his career in research working for a growth accelerator specialist within the technology and professional services sectors; after three years he joined an international consultancy providing business and technology solutions. Nathan holds a degree in International Business & Economics from the University of Westminster and Universitat d’Alacant respectively.